virgin and martyr, Sister of Social Service
Official memorial: 11 May

Sára Salkaházi (born Schalkház) was born on 11 May 1899 in Košice (a.k.a. Kassa), where she studied and obtained an elementary school teacher's degree. After the Trianon Peace Treaty, she refused to take the loyalty oath demanded by the Czechoslovakian government, thus she left teaching, learned the trade of book-binding and worked as an assistant bookbinder. She soon became involved in the literary life, and, from 1919, she started to publish her writings describing the vicissitudes of minority life and encouraging to loyalty in newspapers of Košice and in the Hungarian Daily of Prague. 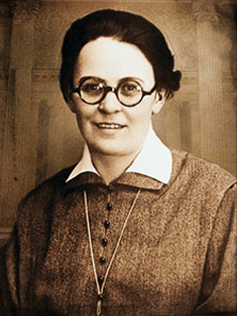 From 1926, she was editor of the official paper of the National Christian Social Party of Czechoslovakia (A NÉP, i.e. THE PEOPLE) and of the Catholic Women (Katholikus Nő). In the same year she published her first short story entitled the Black Recorder (Fekete furulya).

In 1929 she entered the Society of the Sisters of Social Service. She was actively involved in many activities promoting the Society's mission: she organized the Catholic Women's Association of Czechoslovakia, an association of Hungarian women living in minority, furthermore, she gave lectures and taught courses for girls and women and supervised charity works. Her motto was the following: "A Sister of Social Service is a torch. Our task is to illuminate people's path on which we can reach God. I have to be aflame!" She spent her little free time writing articles for different newspapers. Her legends of Christ were published after her death under the title Song and Sigh (Ének és sóhaj).

She professed her final vows at Pentecost 1940. Her motto was: "Alleluia! Ecce ego, mitte me!" ("Here I am. Send me!") Following the Vienna Awards, she carried out charity work in the Subcarpathian region, mostly populated by Hungarians. In 1941 she became the national director of the Hungarian Catholic Working Women's Movement. She not only proclaimed Christian principles in a belligerent country exposed to the unlimited flow of the ideas of National Socialism but, in 1943, she offered her life for the Society, with the permission of her superiors, in case "the persecution of the Church, the Society and of her Sisters would take place".

After the German occupation, the houses of the Sisters of Social Service were filled with refugees, and the sisters hid nearly 1,000 people who were persecuted for their Jewish origins, and provided them with false documents. The hostel led by Sr. Sára, in Bokréta Street in Budapest, also served as a hiding place for many. On 27 December 1944, the armed men of the Arrow Cross Party surrounded the building and took several people assumed to be Jews along with Sr. Sára and Catechist Vilma Bernovits. All of them were shot into the Danube at the Pest-side abutment of the Bridge of Liberty.

Sr. Sára's martyrdom was evident from the beginning: several witnesses had seen her being carried off and die: "Before the volley of bullets, a short woman with short black hair knelt down facing her executioners with inexplicable peace and, looking up into the sky, she signed herself with the cross." After the events the Society of Sisters of Social Service revealed the fact that Sr. Sára had offered her life.

The Sisters started to collect data concerning her martyrdom in 1946; however, the acts were destroyed after the internment of the religious and the nationalization of their houses. A short biography of Sister Sára, written by Natália Palágyi, S.S.S., and published by the Salesian Publishing in 1947, proves the data collection and the general opinion of her martyrdom. The booklet also includes a petition for communicating favours received through her intercession.

Her process of canonization was initiated in 1997. Her beatification, which took place in Budapest 10 years later, was of special importance since it was the first beatification held in Hungary since 1083.

Inquiry of the Holy See (CCS)

Let us pray for her canonization!

Almighty and eternal God,
you crowned the life of Blessed Sára, virgin and martyr,
with martyrdom.
Allow us to proclaim
to the poor, the good news of salvation,
to prisoners, freedom,
and to those in sorrow, joy.
Grant this through our Lord Jesus Christ, your Son,
who lives and reigns with you and the Holy Spirit,
one God, for ever and ever.

Those who obtain favours through her intercession are asked to notify the
Office of the Archdiocese of Esztergom-Budapest
1014 Budapest, Úri u. 62.