Szilárd Bogdánffy was born in 1911 in the village of Crna Bara (a.k.a. Feketetó), then part of Torontal district, Austria-Hungary. He went to the Piarists' grammar school in Timişoara. He started his university studies at the Academy of Theology of Oradea, but his professors sent the outstanding student to the Central Seminary in Budapest. 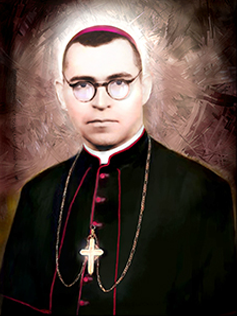 After completing his studies, he returned to his diocese, where he was ordained priest on 29 June 1934. From that day on his life was centred on the education and spiritual direction of the Catholic youth. In 1934, he was appointed substitute professor and prefect of the seminary of Satu Mare. From 1935 he also worked as a teacher of religion and spiritual director of several schools in Oradea. In 1939, the Romanian authorities arrested him based on trumped-up charges and expelled him to Hungary; he was only allowed to return to Oradea in September 1940. He continued his activity as teacher and educator, and he bore the brunt of the reorganization of schools in Oradea after World War II. In 1945, he founded the third order of Ursuline sisters named after Saint Angela Merici.

In 1947 the bishop of Satu Mare, János Scheffler asked him to be his secretary. His intellectual abilities and spirituality made him an outstanding figure in the government of the diocese of Satu Mare and Oradea.

As the persecution of Christians in Romania constantly increased, the Holy See permitted the ordination of clandestine bishops. Szilárd Bogdánffy was consecrated bishop on 14 February 1949 by the regent of the nunciature of Bucharest. Two months later, he was arrested by the Romanian authorities and detained unlawfully for years in the strictest prisons of the country and in the death camp of Capul Midia. "How long are you going to believe in God?", asked his interrogators. He was often tortured and beaten up. "You can endure it", he said to his fellow prisoners. Even in prison, he found the way to serve others every day: he gave hidden pieces of bread to the weak, cigarette to smokers, he carried the heavy sacks for others, and the wards maltreated him several times for these little acts of service. His court hearing only took place in 1953, and he was sentenced to 12 years of forced labour based on false charges. Although his family obtained the annulment of the unlawful judgement, Bishop Szilárd died before the new trial. As a consequence of the torture that he underwent in prison, he passed away on 2 October 1953 in his cell in the prison of Aiud (a.k.a. Nagyenyed). He died as a bloodless martyr for being faithful to his Church.

Inquiry of the Holy See (CCS)
Decree on validity of diocesan inquiry: 5 March 1999
Promulgation of decree on martyrdom: 27 March 2010

Merciful God, you gave your bishop and martyr Blessed Szilárd Bogdánffy the invincible spiritual strength to be faithful to your Church even amidst the suffering.
Grant us, through his intercession, that we may keep the faith that he professed with his words and follow the way that he showed us with his example.
Grant this through our Lord Jesus Christ, your Son, who lives and reigns with you and the Holy Spirit, one God, for ever and ever.
Amen.

Those who obtain favours through his intercession are asked to notify the
Episcopia Romano Catolica
Sirul Canonicilor 7.
RO-410161 Oradea