bishop and martyr
Official memorial: 23 May

Vilmos Apor was born in Sighișoara (a.k.a. Segesvár) on 29 February 1892 in a large family. His father died when Vilmos was still young, and the boy received his excellent education from his mother, who was a devout Catholic. Very early on, he felt the desire to become a priest. Before finishing secondary school, he asked for the following Christmas gift: that his mother let him enter the seminary right after the school leaving exams. He started his studies in Innsbruck in 1910. 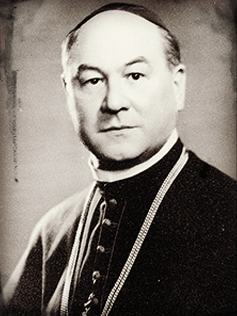 His spirituality is well reflected in his notes taken during a retreat in 1914: "I think that the last beatitude is meant for the apostles, pastors of souls: Blessed are they that suffer persecution for justice' sake. This is what makes a priest happy: self-sacrifice, the sacrifice of one's life and martyrdom."

He was ordained priest on 24 August 1915, and thus became a priest of the diocese of Oradea, with his uncle, Miklós Széchenyi, as his bishop. He first served as a curate in Gyula, then as an army chaplain for a couple of months. He was only 26 years old when he was appointed parish priest of Gyula, and he served his faithful in this position for 23 years. Many things happened in Hungary during his time as parish priest: the 133-day-long terror of the Hungarian Republic of Councils, the devastating consequences of the Trianon peace treaty, the outbreak of World War II, the strengthening of the social and charity service, the development of national missions, and the 34th Eucharistic Congress in 1938.

In February 1941, Pope Pius XII appointed him bishop of Győr. He started his ministry on 2 March as the 72nd bishop of the diocese. He summarized his pastoral programme as follows: "The beauty of priestly life and the priests' willingness to make any sacrifice come from the work, love and passion for the souls and the desire to become all things to all people." As bishop, he continued his social and charitable work that he had begun as a parish priest, and he promoted land distribution for creating smallholdings. During the persecution of the Jews, he actively defended the persecuted and employed all his contacts in favour of those seeking refuge; the episcopal estates, convents and hospitals gave shelter to the needy. He was a gentle and kind person. On Good Friday 1945, he sacrificed his life for his faithful while defending the women hidden in the cellar of the episcopal palace against violent Soviet soldiers: the bullets penetrated his body forming the shape of a cross.

After his death, his confessor asked the vicar capitular, who had taken over the government of the diocese, to initiate his process of canonization without delay. The inquiry was started in 1946 but it was interrupted in 1949 due to historical circumstances, and it was not resumed until 1989. A copy of the Positio was handed over directly to Pope St. John Paul II in 1997, during his visit to Győr, when he prayed in front of the tomb of the bishop and martyr.

Decree on validity of diocesan inquiry: 31 May 1991
Promulgation of decree on martyrdom: 7 July 1997
Beatification: 9 November 1997, Rome

Lord, you granted Blessed Bishop Vilmos Apor
the grace of sacrificing his life for his flock.
Grant us, through his intercession,
that we may always be faithful to your holy will
and spare no effort to promote the salvation of our brothers and sisters.
Grant this through our Lord Jesus Christ, your Son,
who lives and reigns with you and the Holy Spirit,
one God, for ever and ever.

Prayer for his canonization

Almighty and eternal God, your servant, Blessed Bishop Vilmos spent his life looking after the poor with affection.
He bravely defended the victims of injustice.
He heroically sacrificed his life in order to defend his faithful from spiritual and physical danger, and, thus, received the crown of martyrdom.
Lord, grant us through his intercession that we may be living members of our Church, defend the truth with courage and love our neighbours with devoted love.
Lord, deign to glorify your servant Blessed Bishop Vilmos Apor so that we may honour him among the saints and, through his intercession, come to your kingdom, where you live and reign for ever and ever.

Those who obtain favours through his intercession are asked to notify the
Office of the Diocese of Győr
9021 Győr, Káptalandomb 5.