A unique fight for independence

His show trial, causing great international outcry, took place on 3–8 February 1949, at the end of which he was sentenced to life imprisonment. The UN declared that the procedure and the unlawful sentence violated international law.

He spent the majority of his eight-year-long detention in Budapest, in the prison located in Conti Street. Due to his poor health conditions, he spent the last two years in strict house arrest first in Püspökszentlászló, in the Mecsek mountains, then in Felsőpetény, located in the Börzsöny Mountains. That is where he received the news of the 1956 revolution and war of independence, which led to his release on 30 October.

On 3 November, at 8 pm, he made a radio appeal to the nation in the transitory radio station operating in the Parliament building, as the radio headquarters had been ruined by shots and were out of use:

"This was an unprecedented war of independence with the youth leading our nation. The war of independence broke out because the nation wanted to decide how to live. It wanted to be free to govern its fate, administer the state and dispose of the products of its work. A new election, free from abuse, is needed, allowing for the participation of every party. The elections should be supervised by foreign mediators. I stand aloof from and – according to my position – above party politics. Thus, I warn every Hungarian not to let party strife and dissension take over after these beautiful October days of unity. This country, at present, lacks a lot of things but certainly not parties and party leaders. Talking about politics is of secondary importance at the moment: we need to ensure the survival of the nation and our daily bread."  VIDEO >>

At dawn on 4 November, the Cardinal was summoned to the Parliament and was there when the Soviet offensive reached the capital. He went to the embassy of the United States located in the nearby Szabadság Square, accompanied by his secretary Egon Turchányi, and there he was given asylum. Thus, his fifteen-year-long semi-detention began. The Primate thought that his stay at the Embassy would only be a temporary necessity. He took it for granted that the civilized world would not leave Hungary in the lurch. His notes published under the title of Daily Notes (Napi jegyzetek) provide a true picture of his life at the Embassy. 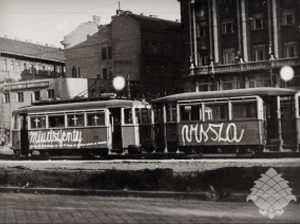