May this, O Lord, flow abundantly upon his head; may it course down upon his mouth; may it sink into the uttermost parts of his whole body, so that the power of thy Spirit might replenish him inwardly as well as shield him outwardly. May constancy of faith, purity of love, and sincerity of peace abound in him. Through thy gift, may his feet be fair to carry a message of peace and to proclaim thy good works.

"As a parish priest, Mindszenty carried out an intensive and wide-ranging activity, and he managed to involve all the priests of the town in his dynamic pastoral and cultural work. I soon realized that I was in the best school of priestly ministry. His personality, his life and his amazing capacity to work impressed me deeply. When doctrinal, moral, legal or other questions arose, we examined the problem carefully and then he always discussed it with us in depths." (Memories of József Vecsey, Mindszenty's chaplain in Zalaegerszeg and his secretary in Vienna)

"In the depth of their hearts, even those who are apparently stand-offish or indifferent expect the priest to do a saintly job." (József Mindszenty)

"I have never met any priest or lay person who took his vocation and the duties resulting from it in such deadly earnest and fulfilled them until to the very last as József Mindszenty." (Memories of Tibor Mészáros, Mindszenty's secretary in Veszprém and Vienna)

"A priest has to be a prophet, who does not let the fire go out in his heart." (József Mindszenty) 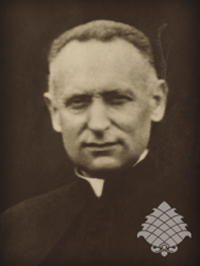 "As a priest, he was enthusiastic, active and untiring, a powerful leader of the priests entrusted to him. He was a strong pillar of his Church. In terms of his social work, he surpassed everyone in supporting families, the elderly, the poor and students, as well as in establishing homes and cultural institutions. He was a man of outstanding intellectual abilities and culture. His speeches and lectures not only absorbed the attention of his audience but also gripped them. We considered him a person of extraordinary organizing abilities and authority." (Béla Teleki)

"Mindszenty was a Hungarian pastor. When his pastoral sense was combined with his historical knowledge and Hungarian identity, what he created was beyond compare. The Hungarian pastor always felt the irresistible attraction of Hungarian saints. He knew their lives, admired and quoted them, and proposed them as models to his people so that, like them, 'we may also become clean, heroes and saints'." (Julián Füzér OFM)

"The only thing I ask of you is that you not believe, whatever is to come in life, that a pastor can be an enemy of his faithful. The priest belongs to each family and you belong to the family of the pastor." (József Mindszenty)