István Sándor was born on 26 October 1914 in Szolnok. His father was a railway worker. He received his religious education both in his family and at the parish church of Szolnok, entrusted to the Franciscans: there he received the sacraments of baptism, the first holy communion and confirmation. He was a member of the Association of the Sacred Heart of children aged 6 to 14, he regularly served at Mass as an altar-boy and participated in spiritual retreats. 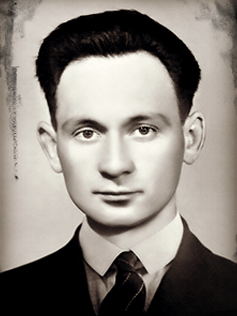 He studied at the boys' school in Polgár, then at the Hungarian Royal Vocational School of Wood and Metal Industry in Szolnok (1928-1931), where he became an iron turner and copper smith.

He got to know the figure and life of Don Bosco and the Salesian order through the Salesian Newsletter and other spiritual writings and religious newspapers published by the Don Bosco Press in Rákospalota. He was deeply impressed by the spirituality of the Salesian Society. He joined the Clarisseum, i.e. the Salesian Society's house in Rákospalota-Újpest, on 12 February 1936. He started to work in the press, he was entrusted with the supervision of the apprentices, and in the church he was in charge of the altar-boys. He soon felt at home among the Salesians: "he liked books, the Altar and the oratory". He had a knack for organizing communities, thus he became an active group leader of the Association of Young Catholic Workers (KIOE).

He began his novitiate on 1 April 1938 in Mezőnyárád. One of his companions remembers that "as early as then he was evidently predestined to take an active part in the education of the youth according to Don Bosco's educational method." He was called up for military service several times. His letters reveal that those periods were, for him, like a "spiritual exile" as he painfully missed the "flower garden of the novitiate" and the daily Mass and Communion. Nevertheless, not even the rough environment could do harm to his unfolding spirituality: "when some difficulty or sadness threatens to overcome me, I rush, under the patronage of Our Lady, to the holy and adorable wounds of the Lord Jesus, and I gain strength from them", he wrote in a letter. He took his first vow on 8 September 1940 for "hoisting Don Bosco's white flag of Our Lady in as many young souls as possible". According to his record of service he also went to the front: first in 1941, then in 1942-43 when he took part in the battles by the Don River as part of the signal corps. He behaved as a good son of Don Bosco even in the trenches: he fulfilled his duties conscientiously but he always remained composed and faithful to his vocation. He also did everything within his reach to take care of his fellow soldiers' spiritual life. After a short captivity, he returned to Hungary and continued his formation within the Salesian Society. He professed the perpetual vows on 24 July 1946, and he continued to work both with the youth and in the press.

Following the dissolution of religious orders, he worked for a short time as a sacristan in the Clarisseum and in Szolnok, then he went back to Budapest and started to work as a labourer in the Persil factory under the false name of István Kiss. He reorganized the banned groups of the Association of Young Catholic Workers among the young people attending the Clarisseum; he regularly met them and instructed them on the life of piety. Some of these young people were ex-students of the Salesians whom the communists considered good party workers and made them join the State Protection Authority. István Sándor's contacts and organizational activity attracted the attention of the communists, who constantly shadowed the religious. His superiors prepared his flight abroad, however, he willingly refused to flee because he did not want to leave the youth in his care.

He was arrested on 28 July 1952. His interrogation also included torture. His trial started on 28 October 1952, in camera. He was quaternary co-defendant in the trumped up proceeding known as the "case of the party guards", and there were several young friends and fellow Salesians of his among the fifteen co-defendants. The major count of indictment against him was "conspiration aimed at overthrowing the democratic state". The communists wanted to set an example with the case of István Sándor in order to "keep churchmen away from young workers, especially from the armed guards of the totalitarian regime". He and three companions were sentenced to death by hanging. The judgement of the court of second instance sustained the sentence and refused all the pleas for mercy but one. István Sándor's death sentence was carried out on 8 June 1953.

Blessed István, we thank you for your strong and generous testimony.
We are proud to know that the Church is mother to children like you.
Obtain for us the grace of living our baptism with renewed fervour and of dedicating our life to our mission with joy and enthusiasm.
Bless your beloved country and the Church of God in Hungary.
Intercede for the order and for the entire Salesian Family.
Accompany the youth of our present age with your smile and your example.

Those who obtain favours through his intercession are asked to notify the
Office of the Archdiocese of Esztergom-Budapest
1014 Budapest, Úri u. 62.