The Servant of God Áron Márton came from a religious Székely family of farmers. He was born on 28 August 1896 in Sândominic. His father was Ágoston Márton and his mother Julianna Kurkó. He completed his secondary school studies in 1915 in Alba Iulia, in the grammar school that also provided pastoral care for the unfolding priestly vocations. 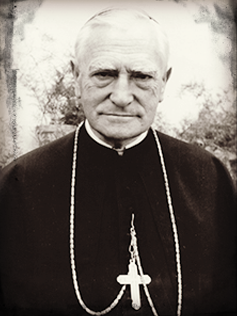 Three days after finishing school, he was called up for military service and sent to service in the field. He returned from the war with a deeper insight into human nature and a rich experience of life. In 1920 he asked to be admitted to the seminary of Alba Iulia. He was ordained priest there on 6 July 1924. After his ordination he received various different tasks: he was chaplain, teacher of religion, pastor of the scattered Hungarians and keeper of the records of the episcopal archives. In Autumn 1932 he was transferred to Cluj, where his dynamic organizational capacity unfolded: he was the spiritual director of university students, founder and editor of the pedagogical review called "Transylvanian School", director of the National Association of Catholics and, as such, spiritual director of the Catholics of Transylvania. At the same time, he was appointed parish priest, then archdeacon and prebendary of the cathedral.

Pope Pius XI appointed him bishop of the diocese of Alba Iulia on 24 December 1938. He was ordained bishop on 12 February 1939 by Andrea Cassulo, apostolic nuncio, in Cluj. His motto was: Non recuso laborem! (I am not reluctant to work!) During his many years as bishop, he struggled and suffered for the survival of his nation and the perseverance of his faithful to the faith. The second Vienna Award divided his diocese into two. Bishop Áron remained in Southern Transylvania, together with his faithful who had become a minority. In May 1944 he travelled to Cluj, which had been re-annexed to Hungary, for a priestly ordination, and in his homily he raised his voice against anti-Semitism and the persecution of the Jews.

After World War II, the Romanian communists made every effort to destroy the faith in God and to limit the freedom of ethnic minorities. They nationalized schools, incorporated the Greek Catholic church into the Orthodox Church and banned the religious orders. Bishop Áron foresaw the future, therefore he started to prepare his priests and the faithful for the suffering awaiting them. On 21 June 1949 he was arrested and spent his two years of remand in various prisons of Romania, all famous for being extremely rigorous. In 1951 he was sentenced to life imprisonment, and in 1955 he was released. He returned to Alba Iulia, and he was again free to exercise his episcopal ministry in his diocese. He cancelled the movement of the priests of peace with a stroke of the pen and forgave those who took part in it.

From 1957 the communist authorities limited his freedom again and kept him under house arrest until 1968; his conversations were tapped and spies kept an eye on all his actions. He was only allowed to leave his flat to go to the cathedral of Alba Iulia, where he administered the sacrament of confirmation and ordained priest. However, it was impossible to prevent the faithful from coming to see him on Sundays even from remote places. In 1968 his presence at various diplomatic events became necessary because he was the only Hungarian Roman Catholic bishop in Romania. He took advantage of the opportunity and also managed to obtain the cancellation of his house arrest, thus he could freely govern his diocese. He travelled to Rome several times and met Pope Paul VI. At the beginning of the 70s he was diagnosed with cancer, which he bore with remarkable patience and without taking painkillers. He passed away on 29 September 1980. He was buried in the crypt of the cathedral of Alba Iulia.

His process of beatification was started in 1992. The first postulator of the cause was Father János Szőke, Salesian father, who had personally known the bishop. Following his death, Dr. Gergely Kovács, chaplain of His Holiness, became the new postulator in 2012.

O God, you chose Bishop Áron to protect your truth, to defend the persecuted and to be good pastor of your flock.
Grant us that we may honour him soon among your saints and that his teaching and example be a bright sign for all of us.

Those who obtain favours through his intercession are asked to notify the
Arhiepiscopia Romano-Catolica, STR. M. Viteazul 21
RO 510010 Alba Iulia