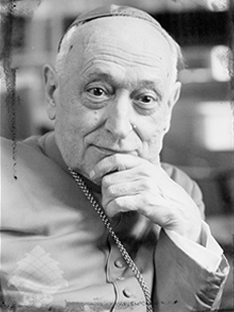 Born in Csehimindszent on March 29, 1892, he studied in Szombathely where he was ordained a priest on June 12, 1915. The title of his first book published was “The Mother”. The agile teacher of religion was arrested on February 9, 1919 and was interned to his native village upon no grounds by the leftist revolutionary regime. Following the collapse of the proletarian dictatorship in Zalaegerszeg, he became townsparson at the unanimous request of the local community. He settled monastic orders, established a school and a college, set up associations and a social welfare institution, initiated press and journal. He acted on behalf of his congregation’s interests in the local, political corporations as well. He performed unparalleled pastoral, cultural and communal work in town, and he became widely known in Hungary at that time. He published his second book on the “Life and Age of Márton Padányi Bíró, Bishop of Veszprém”.

On March 4, 1944 he was appointed bishop of Veszprém. In this capacity he drafted the “Memorandum to the Diocesan Bishops of Trans-Danubia”, also signed by Blessed Bishop Vilmos Apor of Győr, demanding immediate cease-fire. Though asked by the authorities, he refused to hold praise for the deportation of the Jews of Veszprem. In reply to this, on the instruction of the Hungarian nazi cabinet, he was arrested and imprisoned in company with his devoted priests and seminarists. In April 1945 he was released after a four-month long detention.

On October 2, 1945 Pope Pius XII raised him to the rank of Archbishop of Esztergom. The motto on his pontifical coat of arms is Pannonia Sacra, and the principal heraldic figure is Saint Margit of the Arpad dynasty, a symbol of complete confidence in the power of prayer and conciliation. A devoted pastor to his Church, he was a brave spokesman for his people’s freedom both inland and abroad. He took command of appeasing post-war hunger and promoting reconstruction. He spared no effort to tour his archdiocese and the country to reinforce people’s faith and Hungarian identity. Concerning his pontifical initiatives, the Blessed Virgin Year of Atonement and Prayer proclaimed in 1942 is outstanding. He took a stand for the prisoners of war and state: both for soldiers and civilians, for the interned, for the Hungarians persecuted abroad as well as for the Germans inland. His sincere voice, popularity and moral courage was not long tolerated by the expanding communist dictatorship. His active pontifical duty was only a matter of three years. He was arrested on December 26, 1948 and, after being tortured for weeks, sentenced to life. His imprisonment was the beginning of the persecution of the Hungarian Catholic Church lasting for four decades.

The war of independence put an end to his confinement in 1956, as his release was a major claim of the revolution. Its bloody suppression, however, was the opening of his semicaptivity at the American Embassy, lasting for fifteen years. It was his heaviest cross to bear when he left his homeland on Pope Paul VI’s request in 1971. He settled in the Pazmaneum of Vienna. In spite of his old age, he strenuously toured the world to visit Hungarian communities in exile. He published his Memoirs in the free world. He breathed his last on May 6, 1975.

Provisionally buried up to the collapse of the Hungarian tyranny in the votive church of Mariacell, abounding in Hungarian relics, , he was entombed under his will in the crypt of the Primatial Cathedral of Esztergom on May 4, 1991. He was rehabilitated in 1956, in 1990, then in all legal, moral and political sense in 2012. Since the change of regime, he has gained much in popularity from a series of books, films, literary works as well as pieces of music. Statues, monuments, memorial boards mark every important stage of his rich life-work and historic service.

Respect for József Mindszenty, Servant of God has been unbroken for decades, and his tomb is no less than a place of pilgrimage. The proceedings of his canonization, for the success of which hundreds of thousands of people are praying here in Hungary as well as all over the world, has been under way since 1994. Meeting his pontifical desire, more than one million Hungarians have formed groups of prayer and conciliation. 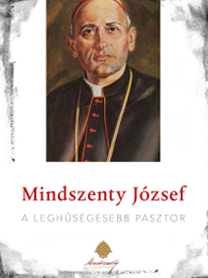