Theodor George Romzha was born on 14 April 1911 in the Subcarpathian region, Austria-Hungary, in the village of Velykyy Bychkiv (a.k.a. Nagybocskó), Maramureș County. Theodore was the ninth child of a modest Greek Catholic family. His father worked as an official of the railways. After his graduation with the highest grade from the secondary school specialized in science in Khust in 1930, Theodore left for Rome to study philosophy and theology. He studied at the Pontifical Gregorian University, and there he was ordained priest at Christmas 1936. His motto was: "I love you, Lord, you are my strength. The Lord is my rock and my fortress." 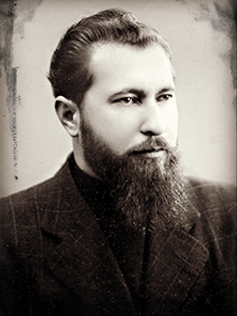 In the summer of 1937 he went home, where he completed his compulsory military service. From autumn he attended the military academy in Prague to become an army chaplain. From spring 1938, he served as a priest in the mountain villages of Brezova and Nyzhniy Bystryy (Maramureș). He wished to return to Rome to continue his studies but he was called up to the army again. Later on, he returned to the mountain villages, where "people were incredibly superstitious, they often gave more credit to all kinds of nonsense than to the dogmas of the Church". "I am trying to give light everywhere but my only hope is God's grace", he wrote in a letter dated 16 December 1938. His work was hindered by the border modifications introduced by the Vienna Awards, which also affected the government of his diocese. In autumn 1939, the bishop of the diocese of Mukacheve, Sándor Sztojka appointed him spiritual director and professor of philosophy at the Eparchial Seminary in Uzhhorod. He was literally a spiritual father to his seminarists, and he transmitted his theological knowledge with loving wisdom.

On 24 September 1944 he was consecrated auxiliary bishop of the diocese of Mukacheve, thus, when the Soviet army occupied the area, he acted as head of the diocese. The military occupation was followed by the restructuring of the public administration and the annexation of the Subcarpathian region by the Soviet Union. At the same time, the Orthodox Church launched an aggressive campaign against the (Greek) Catholic churches and priests in the Subcarpathian region, and called on them to accept the jurisdiction of the Orthodox patriarchate of Moscow. They also wanted Bishop Romzha to do so. However, he refused to obey them and continued to visit the villages of his diocese one by one, and encouraged, with his own fidelity, his priests and the faithful to persevere. The pressure weighing on him constantly increased: religion classes in schools were banned, youth associations were dissolved, there was a lack of prayer books and books of religion, innumerable priest were imprisoned, churches closed or handed over to the Orthodox Church. Despite the adverse circumstances, the bishop remained a good pastor of his flock: many memories have survived both of his liturgical celebrations and of his intimate and serene visits to the families.

In October 1947, he was invited to the re-dedication of the restored church of Lokhovo (a.k.a. Beregszőllős). He was aware of the fact that, as a consequence of his loyalty to the Church and his resistance to the Communists, his life was in imminent danger. Nevertheless, he decided to go. The liturgical event took place without any problems. On the way back, however, Bishop Romzha's horse-drawn carriage was purposely rammed by a truck, whose passengers beat the bishop and his companions until they lost consciousness. The injured were taken to the hospital of Mukachevo. The bishop was beginning to regain his strength when he was poisoned early in the morning of 1 November 1947.

His veneration spread among the faithful and priests of his diocese from the day of his death as a martyr. Some priests offered the Holy Mass for him already in the labour camps, and many families used to finish their night prayer with the following petition: "Bishop Theodore, martyr, pray for us!" Prayer cards that the priests of the diocese used to pray asking God to glorify their martyred bishop by canonizing him were found in various old prayer books and priestly estates. Their prayers were accepted: Theodore Romzha was beatified, along with twenty-eight Greek Catholic martyrs, by Pope John Paul II on 27 June 2001.

Inquiry of the Holy See (CCS)
Decree on validity of diocesan inquiry: 6 November 1998
Promulgation of decree on martyrdom: 24 April 2001

Let us pray for his canonization!

God, you made Blessed Theodore Romzha, bishop and martyr, pastor of your faithful of many nationalities.
Help us to follow faithfully the example of his uncompromising witness and the sacrifice of his life in our Christian life.
Grant this through our Lord Jesus Christ, your Son, who lives and reigns with you and the Holy Spirit, one God, for ever and  ever.

Those who obtain favours through his intercession are asked to notify the
Diocesan Authority
vul. Zakarpatska 18, UA-88017 (Uzhhorod)