bishop and martyr
Official memorial: 17 May

János Scheffler was born in Kálmánd (province of Satu Mare) in 1887 in a serf family of ten children. He completed his secondary school studies at the Catholic grammar school of Satu Mare, then attended the Faculty of Theology of the Pázmány Péter Catholic University. He had excellent intellectual capacities and always had the best grades. 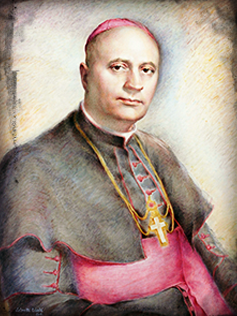 After his priestly ordination, which took place on 6 July 1910, he worked as a pastoral assistant in Ciumești (a.k.a. Csomaköz) and Uzhhorod (a.k.a. Ungvár). He spent two years in Rome, where he obtained his doctorate in canon law at the Pontifical Gregorian University in 1912. After his return to Hungary, he became a professor of theology in Satu Mare (Szatmár); however, he continued his studies in canon law in Budapest and, in 1915, he became a doctor of theology. He was a teacher of religion at the Catholic grammar school of Satu Mare. Later on, he reorganized the school and became its director. From 1923 to 1925 he was the parish priest of Moftinu Mare (a.k.a. Nagymajtény). His bishop soon appointed him professor of theology. He taught canon law and history of the Church in Satu Mare, then in Oradea. In 1939 he became the spiritual director of the seminary in Oradea. Following the merger of the dioceses of Satu Mare and Oradea, he was asked to organize the common faculty of theology and the seminary. At the same time, he also worked as a canon lawyer: he studied the legal aspects of the autonomy of the Church and of the relationship between the Church and the State. He also wrote several books of religion for secondary school students and for groups of more educated Catholics. He drafted the Statutes of the Sisters of Charity of Satu Mare and several writings for retreats, whose manuscripts have been preserved. In 1940, he was appointed professor of the department of canon law of the Franz Joseph University of Cluj.

In 1942 the Holy See appointed him bishop of the diocese of Satu Mare and apostolic administrator of Oradea. From 9 April 1948 he was bishop of the reunified diocese of Satu Mare and Oradea. He continued to consider the promotion of priestly and religious vocations as his principal task. Therefore, he established the Opus Vocationum Ecclesiasticum, organized the pastoral care of vocations, and set up minor seminaries in Satu Mare, Carei and Uzhhorod. As bishop, he promoted the devotion to the Sacred Heart of Jesus. He introduced the feast of the Immaculate Heart of Mary (22 August). On the model of the year of prayer in Hungary, in 1948 he proclaimed the year of Our Lady in his diocese.

During the war, he often defended the persecuted: through his mediation, the Hungarian government cancelled the internment of the Greek Catholic bishop of Baia Mare, Alexandru Rusu, of Romanian nationality. He made every effort to help the people detained in internment camps, especially the Jews. He managed to save his priests who had been carried off by the SS with force. In January 1945, he personally interceded with the Romanian lord lieutenant and the Soviet commander in order to prevent the deportation of his faithful of German-Swabian origin. Sadly, he did not succeed. As early as 1943, he pointed out the possible consequences of the war and of an eventual atheist-communist rule, that is, persecution and suffering; and he emphasized the need of sacrifice, expiation and reparation. In 1945 Pope Pius XII appointed him successor of the bishop of Győr and martyr Vilmos Apor. Nevertheless, he asked the Holy See to be able to remain in his beloved diocese due to its difficult situation. The Holy See accepted his petition.

In 1948, the Romanian government terminated its agreement with the Vatican and dissolved the diocese of Satu Mare by the new law on cultural activities. Bishop Scheffler was made to retire and banned from exercising his episcopal ministry, and his closest colleagues (Szilárd Bogdánffy, Károly Pakocs) were arrested. In 1950 he was interned to the Franciscan convent in Baia de Criș (a.k.a. Körösbánya) because he resisted the communists' efforts to separate the Romanian Catholic Church from the Pope. He could have regained his freedom provided he had accepted the role designed for him by the Romanian government: becoming bishop of the diocese of Alba Iulia (a.k.a. Gyulafehérvár), i.e. the only Roman Catholic diocese recognized by the State, and thus collaborating with the communist power. He refused such a compromise, therefore he was arrested and the communists started a trumped-up criminal proceeding against him. However, he did not live to see his trial because he died on 6 December 1952 in the Jilava prison. During his entire life he strove to find out and fulfil the will of God. He professed the motto of Pope Pius X: Restore all things in Christ.

Both the priests and the faithful regarded János Scheffler as a martyr, who suffered and died in prison, under inhumane conditions, for Christ. Following the fall of communism, Pál Reizer, who was consecrated and appointed bishop of the diocese of Satu Mare in 1990, fulfilled the request of the priests and the faithful by submitting the petition for the initiation of János Scheffler's process of beatification.

Inquiry of the Holy See (CCS)
Decree on validity of diocesan inquiry: 13 May 1998
Promulgation of decree on martyrdom: 1 July 2010
Beatification: 3 July 2011, Satu Mare

Almighty and eternal God, You granted Blessed Bishop János Scheffler the grace to fight for the truth till his death and to be a model of loyalty and obedience to the Church.
Grant that we may imitate his faithful self-giving and find an eternal home in Heaven.
Grant this through our Lord Jesus Christ, your Son, who lives and reigns with you and the Holy Spirit, one God, for ever and ever.

Those who obtain favours through his intercession are asked to notify the
Episcopia Romano Catolica
Str. 1. Decembrie 1918, Nr. 2
RO-440010 Satu Mare