She was born on 8 August 1921 in Szigliget. Her parents worked as servants in a nearby manor. Her father had no documents of identity, thus her parents could not get married. The Servant of God learnt about the truths of the Catholic doctrine at the religion classes of the village school. After her first holy communion she started to lead an intense life of piety and to deepen her knowledge of the faith by reading religious books. 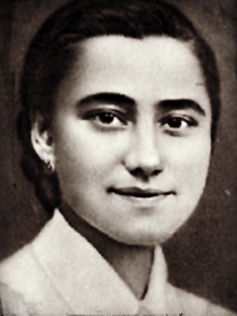 At the age of seventeen, she took part in the popular mission of Balatonfűzfő, where she realized that she wanted to give her whole life to Christ. She felt that she had a vocation to religious life, but, pursuant to the rules of the canon law in force at that time, she was not allowed to enter any order because her parents had not contracted sacramental marriage. 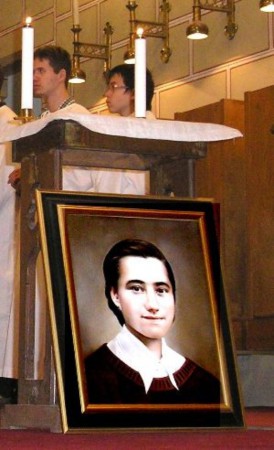 In 1939 she started to work in the Nitrokémia Rt.'s factory in Fűzfőgyártelep. She continued to take her life of piety seriously; in spite of working in three shifts she received the holy communion every day. This gave her the necessary strength to endure the often rude and irreligious mocking, typical among the workmen of the factory. Her calm serenity, her smart but never offensive answers and her hard work soon earned her the respect of her colleagues and superiors.

In 1941, on the feast of Christ the King, she took a private vow of chastity, and in 1942 she joined the Marian Congregation. She was an active member of the Association of the Sacred Heart, where she spent a lot of time with the children, and the service of charity was an integral part of her everyday life. She also joined the Catholic Working Women's Association, where she soon became head of a group and, thus, had the opportunity of giving good example to the working girls. She often asked God to let her die young so that she could bring young people closer to God through her death.

In 1944 the front-line was approaching the village of her family, Litér, and the news of the violence of front-line soldiers against women became ever more worrying. Hearing all this, the Servant of God decided to remain faithful to her vows to Jesus even at the cost of her life. On 23 March 1945 two armed Soviet soldiers attacked the women standing at the entrance of the bomb-shelter. The Servant of God was one of them: she resisted and tried to run away, but even so she accepted her fate. She was worried about her companions and her mother: "Mother, run away from here. I am going to die.", said to her. The soldier shot her several times, and the Servant of God raised her arms towards Heaven and uttered her last words: "My Lord and my King! Take my life!". She was holding the rosary in her hand. The last bullet hit her heart.

The power of her life sacrifice manifested itself almost immediately: two weeks after her death her parents contracted sacramental marriage. Well aware of her pure life and the circumstances of her death, the bishop of Veszprém, József Mindszenty started a diocesan inquiry. The documents, however, did not reach Rome, and due to the historical circumstances it was forbidden to talk about the martyr working girl for decades. The process was taken up again in 1990, but the previous documents were scarcely available. In 2010, a dossier of Latin documents was found in the archives of the cathedral of Veszprém, which gave a new impetus to the process.

Inquiry of the Holy See (CCS)
Decree on validity of diocesan inquiry:
Promulgation of papal decree on martyrdom:

Let us pray for her beatification!

Christ, our King! By her vow of chastity, Magdi promised to be faithful to you for ever.
Instead of the doors of a convent, your providential love opened the gates of a factory before her.
She wished to be a lily in the wreath of your spouses who love you, nevertheless, she transmitted the love for God and for men with the same eagerness to the workmen who had forgotten about you but who deserved a better life.
"My Lord and my King! Take my life!" You heard this last prayer of hers when she shed her blood for You.
Grant us the favour or honouring Magdi among the saints, always to your greater glory.

Those who obtain favours through her intercession are asked to notify the
Archdiocese of Veszprém
8201 Veszprém, Vár u. 16.